Playing a bit of catch up here, so for this week’s Tolkien Tuesday I’m covering the whole of Chapter 6, The Old Forest, and I must say, I think this might be my favourite chapter yet.

I’ve reverted back to the above edition of The Fellowship of the Ring, illustrated by Alan Lee.

In this chapter, Frodo, Sam, Merry and Pippin have finally left the Shire and immediately they are confronted by the reality of the tales of the Old Forest. Footpaths that move, trees which exude animosity to those who walk under them, and shepherd the wary and unwary alike towards the deepest, darkest, most dangerous parts of the forest… And here they do find danger as they fall under the spell of the forest, before rescue arrives in the shape of one of the strangest, perplexing, and probably most divisive characters in The Lord of the Rings. Tom Bombadil. More on him next week…

The geography of this area was fascinating, especially the diverse mixture of tree species which made up the forest itself. There is oak, ash and “other strange and nameless trees of the denser woods”, as well as pines and fir, but perhaps the most standout species, given the hobbits path through the Old Forest and the name of the main geographical feature of the forest, the River Withywindle, is willow.

As I read this chapter, one of the most stand out aspects of it was how well Tolkien captures our fear of getting lost in the woods. An apparently endless expanse of almost identical landscape, with little to no natural daylight filtering down through the dense forest canopy above, and woodland paths that move…this certainly taps into our primal fear of being lost, and subsequently our fear of never being found. And, the more we panic, the more we are open to the possibility that there is something beyond the edge of our vision that means us harm…

Folklore, myth, legend and fairy tales are full of stories – and warnings – about what dangers may be awaiting us in the woods. And it was here, contemplating this, that my thoughts went off on a bit of a tangent…starting with Little Red Riding Hood, and Hansel and Gretel, and ending with perhaps one of my most favourite characters from eastern European fairy tales, Baba Yaga.

When I eventually found my way back to the Old Forest, it was the sentience of the forest described by Tolkien which captured my attention. That, and the notion that trees can intentionally harm other living things. Which got me thinking, if this was really the case, how many ancient woodlands and expanses of forest would have been spared the axe to make way for stupid railway lines (yes, I’m looking at you HS2!) and the innumerable housing developments, business parks and ghastly warehouses which seem to be replacing every green space in this country…And they call this progress 😦

The River Withywindle which flows through the Old Forest, is said to be inspired by the River Cherwell which is a tributary of the River Thames, joining it at Oxford. (ref: https://en.wikipedia.org/wiki/River_Cherwell)

I came across this fact a few years ago when I was writing my review of the British Library Crime Classis, Death on the Cherwell by Mavis Doriel Hay (which you can find over on my book review blog, should you be interested), and thought to squirrel away this nugget of information in case I might need it. And another fun fact, when we visit Stratford-upon-Avon, (photos from these trips I’ve shared on this blog before), our journey crosses the Cherwell.

But can I say I’ve crossed the Withywindle? I would like to think so…

What were your thoughts about Old Man Willow in this chapter?

To me, Old Man Willow personifies Angry Nature, and what happens when we don’t respect, and deliberately abuse, the natural world. When we turn our environment against us. Yet interestingly, in this instance, this means nature and the forest are in effect enemies of the hobbits, which is surprising because we often think of Tolkien writing favourably about the natural world. 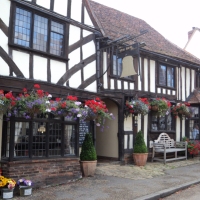